Two historic ceremonial spades with a close connection to North Wales have been reunited for the first time in over a century for a special display at Wrexham County Borough Museum & Archives.

The two ornate ebony-handled silver spades were used at a special ceremony at Acton Grange, near Wrexham, on 6th November 1907. The directors of the United Westminster and Wrexham Collieries Co. hired two special rail cars to transport VIPs and other guests to what would become the pitheads of the Dennis and Martin shafts at Gresford Colliery. The ceremony was the traditional ceremonial cutting of the first sod prior to construction work beginning on sinking the new shafts. The directors presented a spade each to Sir Theodore Martin, chairman of the company and close friend of Queen Victoria, and to Mrs Mabel Dennis, wife of Henry Dyke Dennis, the managing director. Mrs Dennis and Sir Theodore were then invited to cut the first sod of the north (Dennis) and south (Martin) shafts respectively.

The ‘Dennis’ spade was eventually given to the Denbighshire Technical Institute, now Wrexham Glyndŵr University, by Ithel Kelly, the last manager of Gresford Colliery, following the closure of that pit in 1973.

The ‘Martin’ spade was in private hands until it recently appeared at auction and was purchased by Wrexham County Borough Council with the generous support of the Friends of Wrexham Museums.  Since its return, the ‘Martin’ spade has already attracted the interest of the media, appearing in a programme on the ‘Yesterday’ channel. 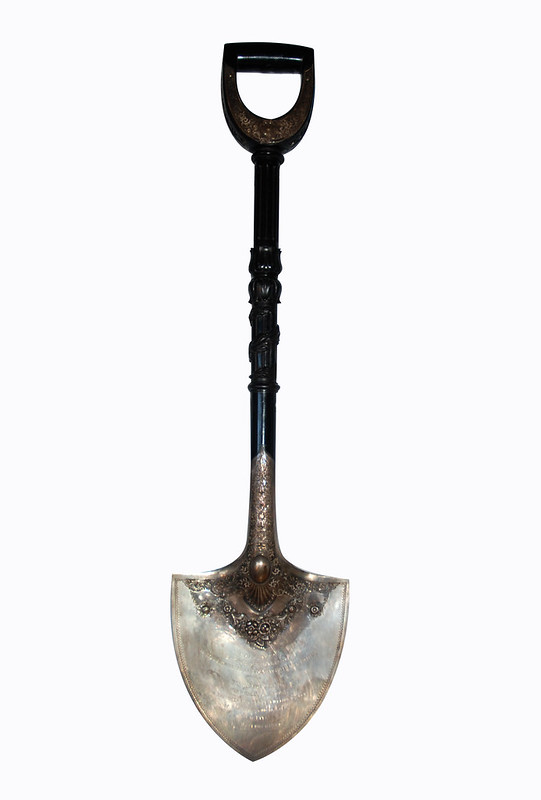 Wrexham Heritage Service would like to thank Wrexham Glyndŵr University for agreeing to lend the ‘Dennis’ spade for what is its first display in a public museum.