Land of Legends: Wales, Arthur and the Tales of the Mabinogion

Set off on a quest this summer to rediscover the magic of the Mabinogion, King Arthur and the Knights of the Round Table in Wrexham Museum’s latest exhibition. Through the manuscripts of the National Library of Wales and the wonderful drawings of Margaret Jones, visitors will be able to discover the origins of these legends and enter their world.

Visitors will be able to see some of the medieval manuscripts that preserved the first written versions of the Four Branches of the Mabinogi and include some of the earliest references to King Arthur including the 14th century Llyfr Gwyn Rhydderch (the White Book of Rhydderch) and Geoffrey of Monmouth’s Historia Regum Britanniae (History of the Kings of Britain), both on display for the first time in north-east Wales.

Elsewhere in the Land of Legends exhibition, books, paintings, drawings, animation and costume will bring alive the mythical world of Welsh legends. Margaret Jones’s original illustrations for Gwyn Thomas’s 1984 update of the Mabinogion are a highlight of the exhibition sparking the imagination and an interest in the Wales that existed a thousand or so years ago.

The exhibition also includes three animations created by students at Wrexham Glyndŵr University, who have been inspired by the legends of Wales. Each animation has been specially produced for showing in this exhibition.

Look out for some legendary costumes, produced by the Museum’s Knitters and Stitchers group, for both adults and children to try on! There will also be a series of activities inspired by the Land of Legends theme on Mondays and Tuesdays during the summer holidays. The museum’s shop will be offering for sale a range of Arthurian and legendary souvenirs and gifts suitable for all ages.

Pwyll, Prince of Dyfed (First Branch of the Mabinogi)

Pwyll (left) is out hunting with his hounds when they come across the hounds of Arawn (centre), lord of the Otherworld, feeding on a dead stag. Arawn’s hounds are white: their red ears and eyes signal that they are otherworldly animals. Pwyll’s hounds drive off Arawn’s hounds and so start a series of events told in this branch of the Mabinogi.

A Woman Dressed in Gold (First Branch of the Mabinogi)

This illustration shows the first time that Pwyll (centre) sees Rhiannon, who is from the Otherworld. Their encounter takes place at Gorsedd Arberth, the stone circle on a magic hill near his court. Rhiannon makes her appearance astride a white horse and together they outwit Pwyll and his men.

Matholwch, king of Ireland, takes against his young wife, Branwen, after three years. He banishes her to work in the royal kitchens and prevents news of her from reaching her family in Wales. Branwen trains a starling to carry a message detailing her plight to her brother, Brân. The starling reaches Brân at his court at Aberffraw on Anglesey..

Bridging the Shannon (Second Branch of the Mabinogi)

Brân leads an army of invasion across the sea to Ireland. Matholwch, king of Ireland, desperate to slow down the invading Welsh army, destroys all the bridges across the rivers. Brân stretches his giant body across the River Shannon allowing his army to walk safely across.

The Boar Hunt (Third Branch of the Mabinogi)

Pryderi, Pwyll’s son and king of Dyfed, and Manawydan, rightful king of Britain, two of the main characters in this tale, are out hunting in the woods. Their hounds startle a boar, an otherworldly creature with red ears and eyes. The boar leads the hounds and the two kings deeper into the wood. Disasters befall Pryderi, his kingdom and Rhiannon (Manawydan’s wife) after they ignore Manawydan’s warnings.

The Naming of Lleu (Fourth Branch of the Mabinogi)

Lleu (the boy on the left) is cursed by his mother, Arianrhod (centre) because she was publically shamed by his birth. Gwydion (right, disguised as a cobbler) is her brother and he uses his magic powers to break the three curses placed on the boy. The picture shows Gwydion measuring Arianrhod’s foot because she wants a pair of his expertly-made shoes.

The Spear through the Stone (Fourth Branch of the Mabinogi)

At the climax of this tale, Lleu kills his rival, Gronw, who earlier in the story, had had an affair with Lleu’s wife, Blodeuwedd. The two lovers had then plotted Lleu’s demise. Lleu challenges Gronw to single combat. Gronw thinks he can outwit Lleu by hiding behind a great stone; however he underestimates the power of Lleu’s spear throwing. Complicated plot lines were not invented by Victorian novelists or the script writers of television soap operas.. 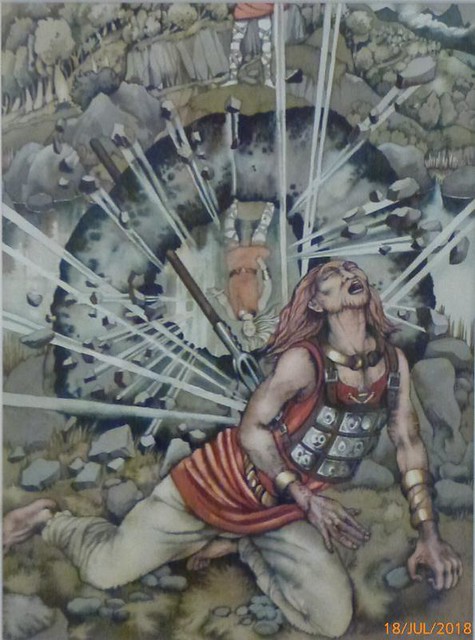